In this week’s Weird Tales Radio Show #171 it’s more high strangeness as our guest Joe Montaldo talks about the Pentagon UFO Report, encounters with flying saucers, and military secrets. The truth may be out there but the government sure isn’t going to tell us.

In this week’s Weird Tales Radio Show #170 our guest is American writer Mark O’Connell, author of the legendary Star Trek Deep Space Nine episode “Who Mourns for Morn”, talking about screenwriting for television as well as his non-fiction work, including his biography of Dr J. Allen Hynek, the “Close Encounters Man” who through his 20-year career on the US Air Force Project Blue Book, helped turn UFOs from fringe to mainstream.

In this week’s Weird Tales Radio Show our guest is American author, blogger and journalist Marc Hartzman who has been described as “one of America’s leading connoisseurs of the bizarre”. Our conversation covers a wide range of fortean topics including: why are we obsessed with the planet Mars, the odd things we sell on eBay, spiritualists and chasing ghosts, plus the weird saga of Oliver Cromwell’s embalmed head, which took on a life of its own – so as to speak. 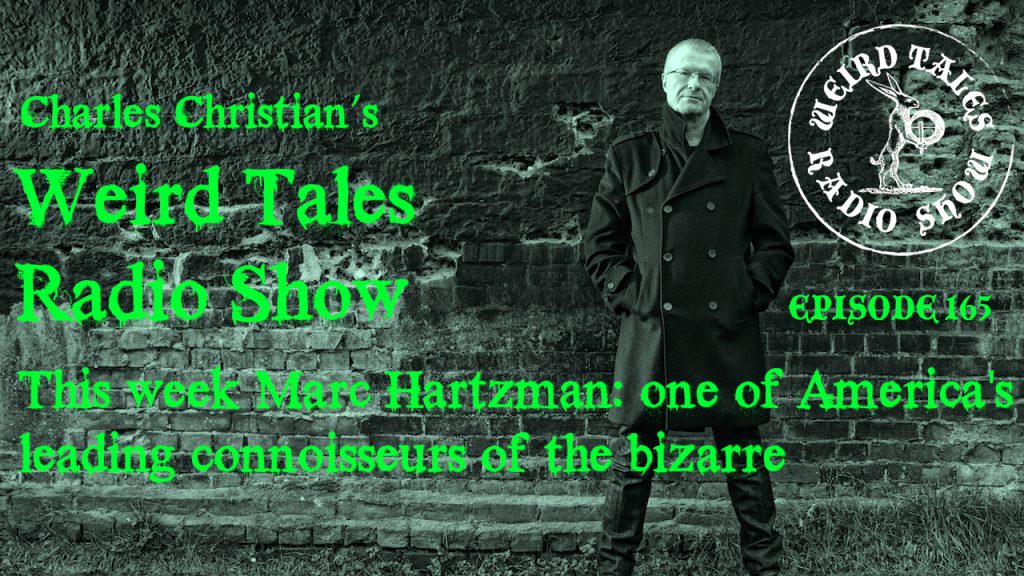 In this week’s Weird Tales Radio Show we have a fantastically eclectic mix ranging from Fawlty Towers trivia and ghost sightings, to love divination folklore and magic spells, plus the mystery of the last Nazi war criminal, as well as another murderous medic – was he also Jack the Ripper? And the Attack of the Killer Vegetables!!!

In this week’s Weird Tales Radio Show we talk to American witch and pagan Carolyn Duffy, we have some May the Fourth Be With You Star Wars Trivia, we head to the Brecon Beacons in Wales to learn of a lost portal to Fairyland, our Fabulous Creature Feature looks at Leprechauns, and we hear the tale of the murderous Dr Edwin Pritchard – the Tapioca Killer.

In this week’s Weird Tales Radio Show our guest is American writer, historian, antiquarian & mystic Robert W. Sullivan talking about Freemasonry, its symbolism, impact on popular cinema & whether the United States is a Masonic democracy? On a lighter note we also have good news for anyone cornered by a Tyrannosaurus Rex!

Here are the links:
https://www.youtube/c/weirdtalesshow

END_OF_DOCUMENT_TOKEN_TO_BE_REPLACED

EERIE EARTH with Kieran Begg  airs Mondays at 8:30 PM Central/1:30 AM GMT only on Midnight.FM

Join Kieran for the conclusion of “Tales of the Underground” as he guides you down deep below the streets of London to tell three original stories based on true accounts of the ghosts that plague the many stations and platforms in the warren of tunnels beneath the bustling metropolis.

Kieran Begg is a writer and the host of the UK late night radio show, “Eerie Earth”. Investigating the paranormal since 2007, Kieran’s fright and fascination in the field spans for most of his life since childhood, as his father would regale him with tales of intrigue from his haunted drama studio, with the shenanigans of a pesky poltergeist.

Getting his start in the field in 2007 while studying in college for television production, as he wrote his first documentary script about ghost stories of Aberdeen, he was invited to join a local paranormal group where he spent two years investigating locations around Scotland.

After moving to Bristol, he started his own paranormal group, “Torchlight Paranormal,” investigating some of the most haunted locations around the South West of England, including the infamous Ancient Ram Inn.

From Ghosts and Spirits, to Ufology and Cryptozoology, Folklore and Dark Tales that plague some of the most haunted cities in the world, “Eerie Earth” takes you on a journey discussing everything in the field. Join us in examining this wonderful and fascinating “Eerie Earth”, Mondays at 8:30 PM Central/2:30 AM GMT on Midnight.FM

FOLLOW EERIE EARTH for an interactive experience with the show, as we examine the evidence and talk with the audience!

In this week’s Weird Tales Radio Show we talk to US journalist and writer Matt Swayne about the ghosts of rock ’n’ roll and country music, including the notorious Forever 27 Club.